As promised, some pics of the party at kryzt’s + taopok session for -V- Co. 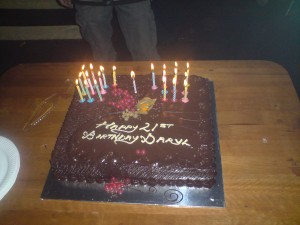 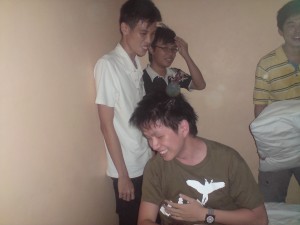 And because I pressed the wrong button. SEE IT AGAIN IN ALL ITS GLORY!!! 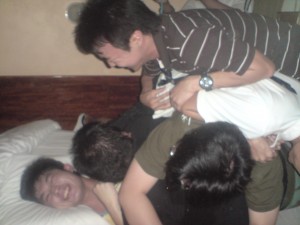 And now the photo you all waiting for, Spuddy’s “song dah” face as he gets piled on.

First off, happy birthday once again to Kryztallnach on his 21st!

-V- Co. wishes you a great birthday, and you damn well better display the big model we got you hor. =P

For those who didn’t make it, don’t worry, you missed a big bashing session where every -V- Co. member present SAVE CHAOSITY (Hint hint) got a few whacks on the head when we were all in the bedroom. Don’t ask about the gayness related to that statement.

The food was awesome (Especially the otak) and became even more so when the duo BBQ’ing next door vacated their BBQ pit and let us roast our marshmellows on it. There are photos, but someone else has them.

Here’s another toast to -V- Co. and many years ahead!

Guys so we know Spud will bet spain tonite..everyone BET RUSSIA MAN ITS A SURE WIN LOL..unless spud change his bet..

The night is still young when I arrived at fei’s place. Despite being one of the earliest to reach, the party has already begun. In the room, we could see Fei, Chaosity, Ace, Fei’s friend and Fei’s niece Charmaine (if im not wrong) , rocking the PS3 already.

Some warming up before the 5th Co. rockband world tour begins, we had modified versions of some songs, the most notable of all, “My iron lung” by Radiohead. At around 10+, Cock gave us a call and asked if we wanted anything from mac, and chaos, being a bastard as he always is, ordered X 2 of whatever is being ordered by everyone. Cock came later in his sexy jogging outfit (cause he’s too nub and couldnt escape his night jogging) and brought us our midnight snack(cock paid for EVERYTHING!), THANKS COCK WE LOVE YOU!

Cooty joined in later, and we finally got our rockband squad gathered. (missing a few others but that’s all we have for the night!) Some warming up and introducing cooty to the rockband game, and we’re set to go! Spud created a female hawt babe character, followed by ace making an ugly monkey face guy, the other 2 chars are Fei’s drummer character and chao’s singer, Ultimation (ROFL)

*We started off great, passing the songs and getting quite a lot of fans, but things started to go downhill as our fresh rockers get pwned by harder songs. We even reached a point which we lost all of our fans

*We eventually started juggling with our roles, and cooty took over Ace as the singer, Spud as the drummer, chaos still the guitarist, and ace as the bass. As we wanted more people to participate in the game, we introduce a new role in the group, the PEDALIST! and cock gladly took the role as the pedalist in the 5th Co. rockband squad.

*After cooty took over as the singer, things went awry for him. The mic registered a high note when he sings low and vice versa, and he got damn pissed with it. To save the band from losing more fans, ace took over and performed the 5th Co. edition of Creep, and won back many of our fans with a 5star rating.

*We went on to clearing more shows, and eventually cleared enough to have enough cash for the complete make over for our rockband squad! The theme for the night: p|NkSt3R`

*Ace laughed so hard @ Ultimation that we all got complained. wth la ace! He even laughed when singing, and caused us to losing the next 2 tours.

It was already 4:15am by then, and we finally packed our stuff and left Fei’s house. A great night out and im glad i was there. thanks kids.

Shy boy chaos, always wanting to hide from the camera!

My first attempt at creating a full video.

This is a Team Fortress 2 Snipe Movie I’ve made after slapping together some decent footage and nice shots from recent scrims. I hoped to create something different from average frag videos that only showcase endless headshots against scrubs and easy targets.

I’ve lost quite a bit of footage due to the recent TF2 update, so pardon the short length of this movie.